In a recent Barron’s article, financial analyst Mark Hulbert wrote that many of the investment advisors he monitors on a regular basis are concerned that high interest rates will entice investors to move their dollars from equities to bonds.

He cites the so-called “Great Rotation” theory that emerged in 2011 and predicted a huge shift from bond funds into equity fund as “investors came to appreciate the near certainty that interest rates would eventually rise from the rock-bottom levels that prevailed.” Since interest rates did rise and the stock market performed well, Hulbert writes, the theory gained credence—but he argues that there was no mass migration. 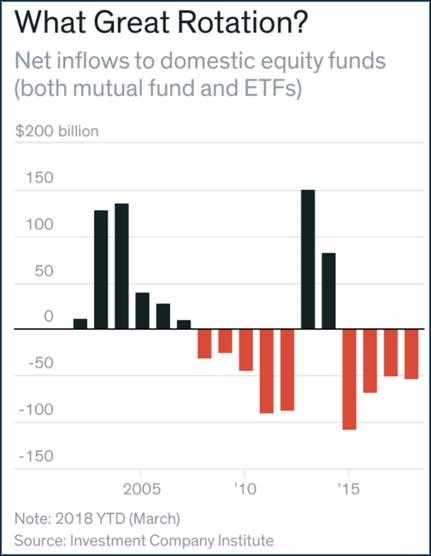 Hulbert points out that, since the beginning of 2011, “more money has been withdrawn from domestic equity funds than new money invested.” He argues that a mass migration of assets away from bond funds to stock funds, therefore, cannot have been the cause of the stock market’s impressive performance in recent years—which in turn suggests that a “mass exodus the other way—call it a Great Reverse Rotation—may not come to pass, even with bond yields higher than they’ve been in many years.”

One of the reasons the predicted bond outflow did not take place over the past few years may be that an increasing number of investors are sticking to set asset allocations in their portfolios, says ICI chief economist Sean Collins. Periodic rebalancing that occurs to maintain those allocations means that money will move from outperformers and into underperformers. “That’s just the opposite of what proponents of the Great Rotation had presumed,” Hulbert writes. He also notes that fund investors do not currently have an above-average allocation to equities—it’s about the same as the average has been since 2001 (73%).

Hulbert concludes that just as the Great Rotation didn’t come to pass, “it seems doubtful that a Great Reverse Rotation is imminent.”