When predicting future real returns of stock markets, the cyclically adjusted price/earnings ratio (CAPE) is a good place to start. The formula, first proposed by guru Benjamin Graham, is pretty simple: the current price of a stock market (or single stock) divided by the average earnings of the last 10 years (both adjusted for inflation). An article in this month’s “Enterprising Investor” speaks to how this calculation has recently come under scrutiny.

Wharton professor Jeremy Siegel contends that accounting changes effected in the early 1990’s have resulted in artificially low earnings numbers and, subsequently, artificially high CAPE ratios. This has led to what he and others believe is unwarranted pessimism around future returns. But that’s only half the story: The current CAPE is often compared to long-term averages spanning back centuries, which has led Siegel and others to argue that the ratio might be more useful if compared to more recent history (so that earnings figures are more consistently represented).

The problem, however, is that the results get a little wonky when much shorter time periods are used to run the regressions. Joachim Klement, CFA and author of the article, calculated CAPE for the U.S. market and estimated a regression analysis on five-year real returns. Starting in January 1910, the regression results in an extremely low return forecast (1.9%) and a low R2 (.21) as outlined in the following chart: 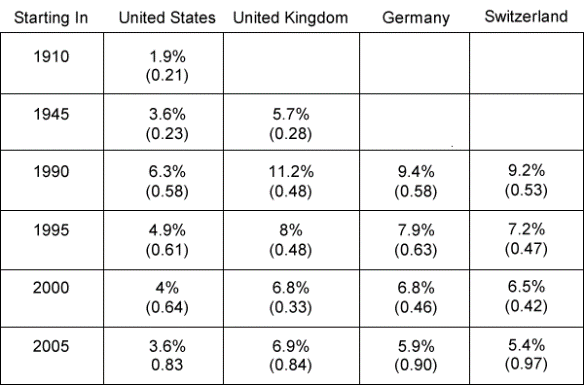 Note: R2 (in parentheses below the return percentage) represents the correlation between the forecast and realized returns (0 indicates no correlation, while 1.0 shows that they track perfectly).

If the regression begins in 1945, however, R2 remains low but predicted return increases. If started in 1990, both return and R2 rises. Thereafter, return drops and R2 rises.

The author repeated the exercise to predict real returns in markets of 38 different countries and found that, depending on the starting points used, there was a fairly wide range of return forecasts which suggested extremely varied outlooks.

The lesson: Forecasts depend not only on variables, but also on the time frames used.