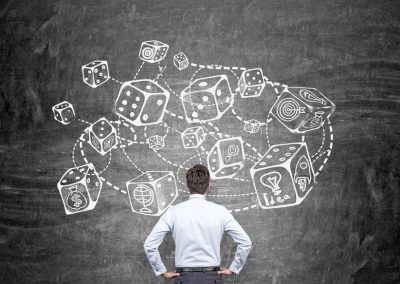 The $1.5 billion Mega Millions jackpot had a lot of people daydreaming about what they would do if they won such a windfall. With odds of about 1 in 250 million, you can almost guarantee with 100% certainty that you and everyone else you know that bought a ticket woke up on last Wednesday to be disappointed. Still, someone was lucky enough to become a multi-millionaire overnight. While luck and pure chance sit at the heart of lottery winnings, elements of luck also play a role in investing that is often misunderstood and underappreciated by most.

On August 30th, the day of Warren Buffett’s eighty-eighth birthday, an article in CNBC underscored the legendary investor’s view that luck has been an “instrumental factor in building his billionaire fortune.”

“Luck may seem like the least tangible, least controllable success factor,” the article says, offering an example from Buffett’s history cited by University of Maryland finance professor David Kass that might fall under the aegis of “making your own luck.” When Buffett learned, at age 20, that his investing role model Benjamin Graham was the Chairman of GEICO, he trained from Washington D.C. to New York to learn more about the company. The day he arrived, he was fortunate enough to spend four hours with Lorimar Davidson, who shared a wealth of information with Buffett on the insurance industry in general and on GEICO specifically (Davidson would later go on to be CEO of GEICO). The meeting was a springboard to Buffett’s involvement in the insurance business, which is now one of the main drivers of Berkshire earnings power.

Buffett isn’t the only one. In another interview on CNBC, prominent investor Leon Cooperman, CEO of Omega Advisors, said “Whatever success I’ve achieved, I think I’ve achieved it because I’ve been very lucky.”

So how does one square the great long-term investment track records of Buffett and Cooperman, which clearly required many contributing factors, including skill, discipline, hard work, a sound analytical process, an independent and sometimes contrarian mindset, and a value orientation with the role of luck? As Michael Mauboussin of BlueMountain Capital Management put it, the extremely positive outliers, including Buffett, “are the product of lots of skill and lots of luck”.

In a recent podcast with Tim Ferris, Howard Marks, Oaktree Capital co-founder and author of the new book, Mastering the Market Cycle: Getting the Odds on Your Side, shares some important wisdom about randomness when it comes to investing. Uncertainty is universal in the markets, Marks explains, and the future should not be viewed as an event that is pre-determined or predictable, but rather as a range of possibilities, like a “probability distribution”. Unlike other businesses, he says, in investing there’s no single approach that will always render a successful outcome.

If you accept Marks’ idea that the future is really unknowable and that there is a range of possibilities, then you also have to accept that luck, or events that work out in your favor or against you, will impact the result you get.

As an example, consider a manager who launched a value-based fund in 2007. Despite the fact that value has outperformed the market over the long-term, that manager is now likely looking at over a decade where they have underperformed the market. As a contrast, if that same manager launched a value fund in 2000, they would likely have had significant outperformance in the following seven years. The same manager with the same strategy launched at two different times would have had two completely different outcomes. The first manager would probably be out of business. The second would likely have attracted significant assets. But in reality, the only difference between the two is timing and luck.

So how do you combat the role of luck in investing? The short answer is you can’t, but that doesn’t mean you are powerless.

How to Put Luck on Your Side

One of the ways to combat luck is to understand it and the role it plays in portfolio returns. In the example of the value manager above, a long-term investor is only likely to be tripped up by the strategies underperformance if they abandon it. If you understand going in that value strategies can experience very long periods of underperformance, then you will also understand that the underperformance is likely the result of luck when you are going through it. That will allow you to persevere through the bad period and benefit from the eventual mean reversion.

The second way to combat luck is to spread your bets enough to ensure that it only affects your short-term outcomes and not your long-term ones. If you want to invest in value stocks and you buy 5 stocks, you are taking a big risk that luck will eventually derail you due to problems with individual positions within your portfolio. If you invest in 30 stocks, you will limit the role of luck substantially and increase the chances that your long-term outcome will look like what you are expecting it to. This isn’t a case for closet indexing, but it does mean that you want to make enough bets to put the odds on your side.

As Michael Mauboussin explains in his book The Success Equation: Untangling Skill and Luck in Business, Sports, and Investing, developing and following a sound process is a third way luck can be minimized over time. If you have a sound intellectual framework and a consistent and disciplined process that can be adhered to over time, you can remove the potential for the unlucky events and put the odds in you favor that your process will win out with time. Mauboussin explains it this way …

“If you compete in a field where luck plays a role, you should focus more on the process of how you make decisions and rely less on the short-term outcomes. The reason is that luck breaks the direct link between skill and results—you can be skillful and have a poor outcome and unskillful and have a good outcome. Think of playing blackjack at a casino. Basic strategy says that you should stand— not ask for a hit—if you are dealt a 17. That’s the proper process, and ensures that you’ll do the best over the long haul. But if you ask for a hit and the dealer flips a 4, you’ll have won the hand despite a poor process. The point is that the outcome didn’t reveal the skill of the player, only the process did. So focus on process.”

Life is Full of Luck, Even When We Can’t See It

One last Buffett story, which showcases how luck plays a role in life and success. Originally, Buffett wanted to go to Harvard. He applied, only to be rejected. In searching for back-ups, Buffett was reading through a brochure on Columbia and recognized the names of Ben Graham and David Dodd as authors of the investment book, Security Analysis, which Graham and Dodd co-authored. Well, the rest is history as Buffett then attended Columbia and where Ben Graham’s teachings were massively influential on Buffett. As Buffett puts it, getting rejected from Harvard “turned out to be the best thing that ever happened to me.”

Buffett has often said that Graham taught him two core rules in investing. Rule #1, “Never lose money”. Rule #2, “Never forget rule number one”. I would add in a third, “Don’t forget luck plays an important role in investing and in life.”

Justin J. Carbonneau is Partner at Validea Capital Management and Validea.com. You can follow Justin on Twitter @jjcarbonneau.