A recent Bloomberg article underscores the similarity between today’s market conditions and those of the 1960s; specifically, how low unemployment set inflation on an upward run, “virtually doubling over the year to 3 percent.”

Some economists, the article reports, see trouble looming again. The article quotes Paul Tudor Jones, founder of hedge fund Tudor Investment Corp., who told Goldman Sachs, “This reminds me of the late 1960s when we experimented with low rates and fiscal stimulus to keep the economy at full employment and fund the Vietnam War.” 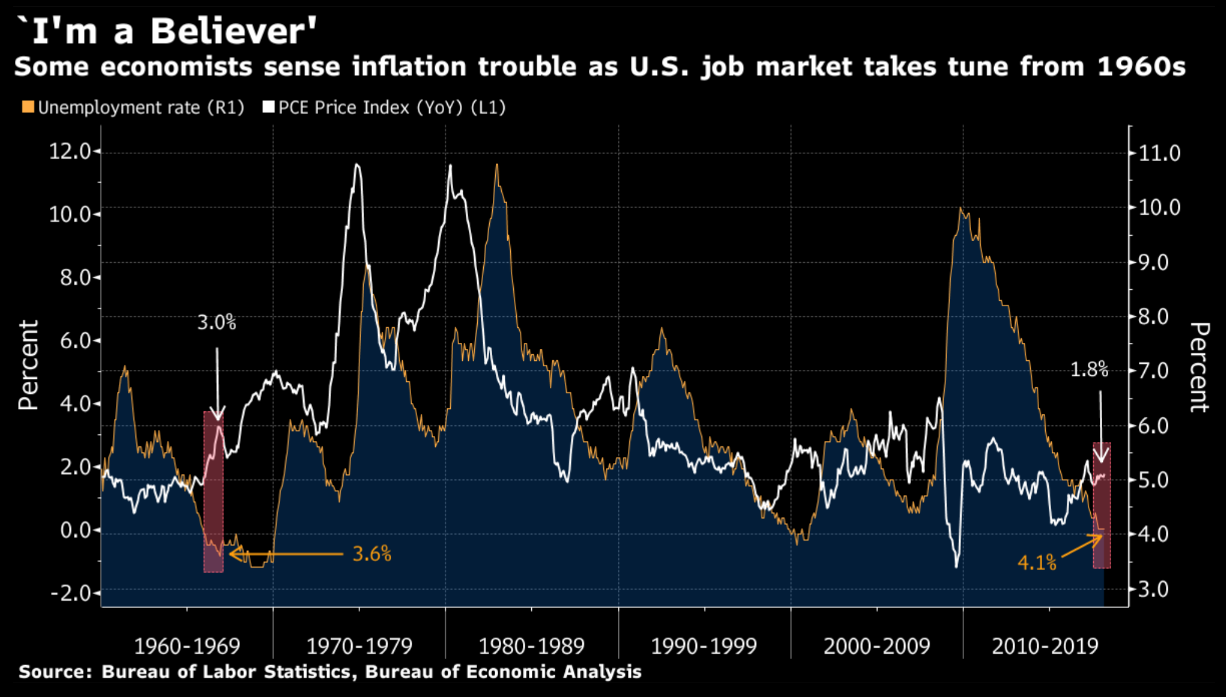 The article points out that the current trend in fiscal policy also harkens back to that era—recalling tax cuts by President John F. Kennedy and the “guns-and-butter spending splurge of his successor, Lyndon Baines Johnson.”

But data from the Commerce Department shows that inflation is holding fairly steady, and the article says the Fed recognizes the importance of maintaining that trend. It quotes former Fed governor Frederic Mishkin (now a professor at Columbia University), who argues that the likelihood of seeing a sharp uptick in inflation is much lower than it was in the ’60s.

“The future course of inflation may ultimately boil down to whether there’s a kink in the Phillips Curve,” the article states (referring to the economic theory that there is a stable, inverse relationship between unemployment and inflation). According to the article, “The experience of the last 20 years indicates that the curve is very flat—that is, continued declines in the jobless rate don’t lead to much, if any, increased inflation.”

That said, things could change should unemployment dip below 3.75%–this according to findings by former Fed staffers Nathan Babb and Alan Detmeister (outlined in a paper published last year). It takes time once you hit that 3.75 percent level for the inflation rate to really start to rise,” says Detmeister, now an economist with UBS Securities LLC. “The further you move below 3.75 percent, the more quickly that build-up becomes.”