A Morgan Stanley strategist is seeing signs that the stock market’s current momentum could be waning, according to a recent article in The Wall Street Journal.

According to equity strategist Michael Wilson, the article says, there is evidence of a “buying climax” that could result in a dip over the weeks ahead. “Technical sell signals,” says WSJ, “haven’t proved terribly useful to investors this year as the stock market has gone nowhere but up.

Even so,” it adds, “Mr. Wilson points to muted post-earnings price performance and a popular reading on market momentum as signs that this rally could be running out of steam.” The strategist also argues that investors are viewing earnings misses more harshly than beats—which suggests that they may have bid up shares ahead of earnings season and could have “exhausted their enthusiasm even though earnings growth has been pretty much as expected.” 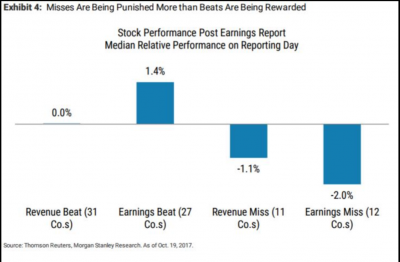 Another worrisome indicator to Wilson, the article reports, is the relative strength index (RSI), which compares the level of share gains and losses to identify “overbought” or “oversold” conditions. The S&P 500, according to WSJ, has reflected a 14-day RSI of over 70, which Wilson views as an overbought level. This has held for 15 days, the longest period since 1996.  Wilson found, the article reports, that in the 13 similar periods when the benchmark was “comparably overbought” since 1975, a dip of at least 2% occurred within one month.

That said, the article concludes, Wilson expects the S&P 500 to hit 2700 by early 2018, and believes investors should buy into any pullback.