“The market can stay irrational longer than the investor can stay solvent”, writes Jeremy Grantham in a recent Barron’s article.

Grantham addresses the fact that, since 1996, the market mean PE ratio has risen by 65% to 75%. He covers various periods in history, respective rises and crashes, showing that while there are always oscillations they have settled at a much higher PE: 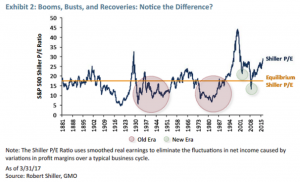 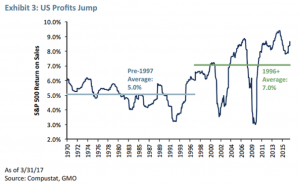 While he outlines several other factors affecting the higher valuations, Grantham concludes that “the most important for understanding the stock market is, in my opinion, the much higher level of corporate profits.” He lists several reasons for this, including the following:

He concludes: “Net-net, unless there are some substantial unexpected negatives, U.S. corporate margins will be up this year, making for the likelihood, in my opinion, of an up year in the market at least until late in the year.”