Investors shying away from stretched stock prices in the U.S. are “gravitating toward Europe for cheaper bargains as the trade matures,” according to a recent Bloomberg article.

Morgan Stanley equity strategists raised their 2017 earnings-per-share growth forecasts for the MSCI Europe Index to 16% from a previous projection of 12%, the article reports. According to strategists at Societe Generale SA, the S&P 500 has “limited potential for returns over the next couple of years compared to euro-area equities which are trading at a 47% discount to their U.S. counterparts based on price-book value.”

Overseas equity funds, however, are not experiencing large inflows according to data provider EFPR—a mere $245 million compared to $32 billion for U.S. stocks. Political uncertainty may be a contributor, as the region both processes and prepares for various elections. The article reports that a survey conducted by Bank of America Merrill Lynch shows “68% of European fund managers predict positive economic momentum over the next year, while only 32% see downside risk to consensus earnings estimates, a two-year low.”

Still, say equity strategists at Barclays Bank, it seems that investors are “pricing in recession in the euro area, despite the recent acceleration in economic indicators.” 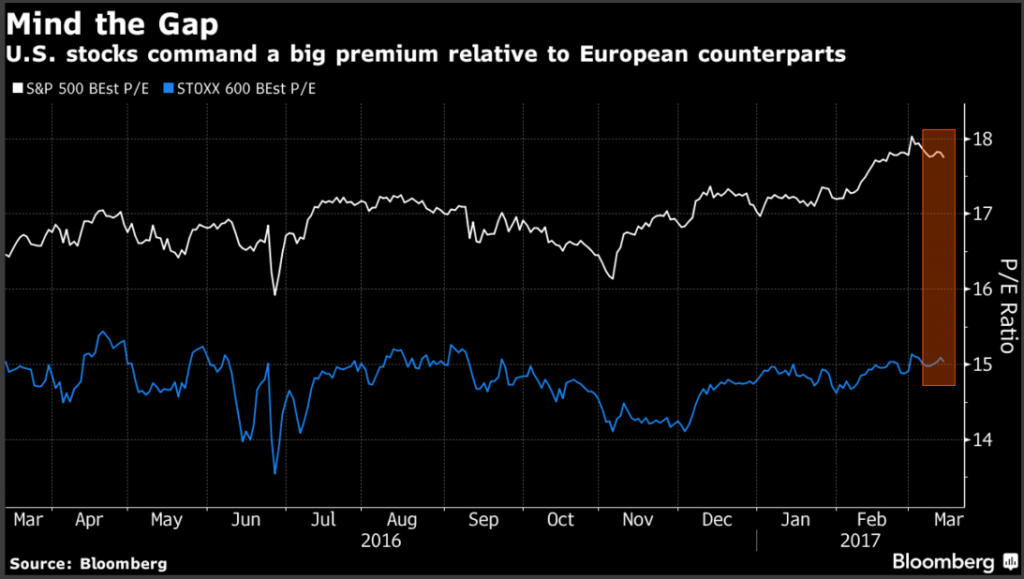