An article in Bloomberg refutes the claims by a Pew Charitable Trust report that was subtitled, “Substantial investments in complex and risky assets exposes fund to market volatility and high fees.”

The article states, “There are two independent assertions here, both misleading:”

The first argument refers to the statement that investment in risky assets exposes pension funds to market volatility: “True enough,” the article states, “but the report documents that the amount allocated toward stocks has fallen from 61 percent in 2006 to 48 percent in 2016, the latest year for which data are available.” A more accurate suggestion, then, might be to say that “declining” investment in risky assets reduces exposure to market volatility.

The second assertion, the article points out, “concerns complex asset and high fees,” noting that pension funds pay approximately $12 billion in investment fees per year and “underperform passive investment strategies as a group by about the same $12 billion.” It adds, however, that those funds paying higher fees and making use of alternative investments are not the ones paying the cost. “With some exceptions,” the article notes, “they outperform passive after the higher fees. The worst net performances versus passive are seen in funds with moderate fees and low allocation to alternatives.” 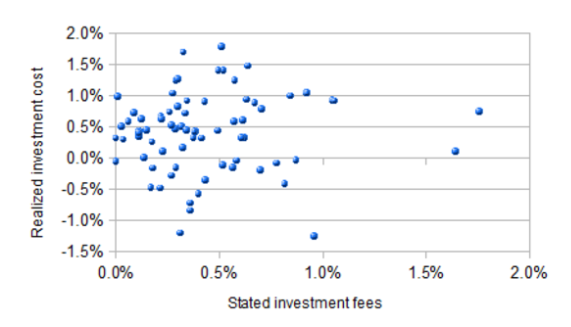 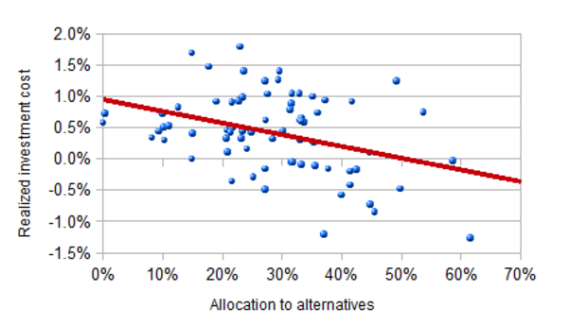 The article presents regression data showing that “the best net performances were turned in by funds paying a range of fees from about half the average to three times the average:”

“The Pew report suggests that funds should cut market risk and fees paid, meaning put more money in passive bond index funds or U.S. Treasury securities. But a more granular look at the data suggests funds should be willing to embrace more broadly diversified portfolios and to pay fair fees, and that the damage is done by high-fee investments that underperform passive, not by any particular asset class.”