An article in Wealthmanagement.com compares the performance of four financial gurus by outlining a simulation of their signature portfolios “using readily available index funds and grantor trusts, annually rebalanced from September 2005 through July 2018, and put them up against a classic ’60/40′ portfolio of U.S. stocks and broad market bonds”: 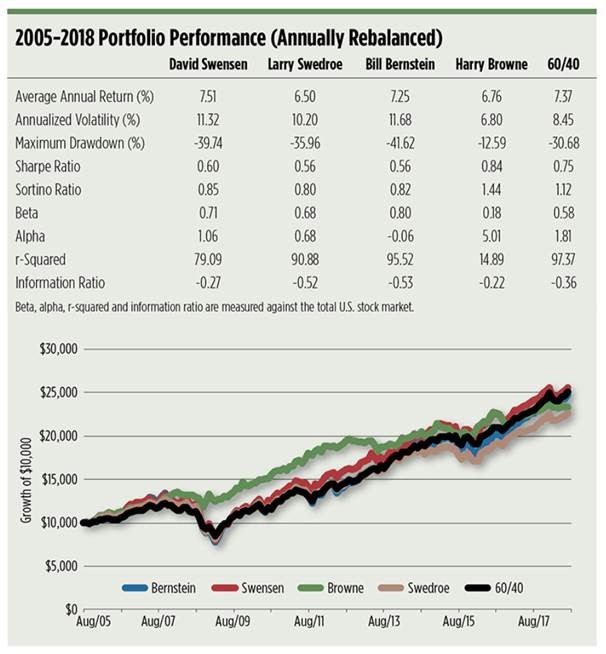 The data shows that, over the past 13 years, the approach of David Swensen (who has been chief investment officer at Yale University since 1985) yielded the highest compound growth rate, although the results came in second to that of investment advisor and author Harry Browne. Swedroe’s strategy, the article says, “notches the lowest average annual return, making it considerably less alpha efficient. This underperformance is largely due to the portfolio’s value tilt, a factor emphasis that was out of favor for much of the study period.” The more simple approach of neurologist and financial theorist Bill Bernstein is described in the article as the “four-bean salad of portfolios, serving up equal dollops of U.S. large- and small-cap equities, foreign stock and domestic broad market bonds.” This strategy, it says, “significantly underperforms on a risk-adjusted basis.”

The article concludes: “Our analysis shines a light on two portfolios for their outperformance. First, there’s the Swensen mix which earned the highest average annual gain. Then there’s the Browne portfolio for its risk control. Which approach is more likely to get you to your investment goal? The answer to that question largely depends upon your faith and your time horizon.” The article suggests, for those investors who think the bull market has longer to run, Swensen’s approach might be the best fit. If an investor is facing a longer time horizon, however, it says, “you’re better off considering the permanent portfolio route.”