In a follow-up to an article it published a few days earlier, Bloomberg recently reported that hedge fund manager Steven Cohen “is preparing to raise as much as $10 billion from outside investors in 2018 for a new fund.”

The move, the article says, would represent an “extraordinary turnaround” for Cohen, particularly given that his former firm, SAC, got bad press four years ago on its guilty plea to insider trading for which it paid a “record $1.8 billion penalty.”

The article suggests that Cohen’s efforts could be an attempt to save face with investors, but argues that if he isn’t able to generate the returns he has been known for, it “would only reinforce the suspicions he might be trying to dispel.” 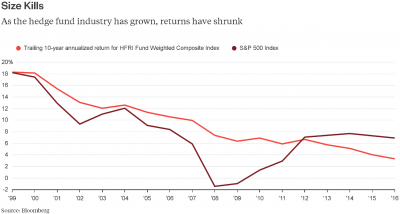 But the show-stopping returns SAC was able to deliver investors will be tough to replicate, the article says, noting that over the period from SAC’s launch (1992) to 2002, “the fund returned roughly 43 percent annually, or 30 percentage points annually better than the S&P 500.” Data shows, it argues, that as the hedge fund industry has ballooned, returns have contracted.

“It’s a recurring theme in finance: Size kills.” concluding, “It’s one that Cohen can’t ignore as he decides whether he wants to try to reconjure the magic.”