Luiz Alves Paes de Barros has made a killing by “wagering on stocks almost no one else seemed to want,” says a recent Bloomberg article.

The sixty-nine-year-old is known as the “anonymous billionaire” for his under-the-radar but hugely successful investments. Most recently, during one of the worst recessions in Brazil’s history, his company Alaska Investimentos Ltda. bet big on the floundering retailer Magazine Luiza SA which, according to the article, “has surged more than 1,000 percent since reaching a record low about a year ago, making it the top stock in one of the world’s top-performing markets.” The holding is part of Alaska’s Black Master fund, which the article says became “the No. 2 fund among 569 peers focused on Brazilian equities, according to data compiled by Bloomberg.”

The article says that Barros makes no claim that he knew how well the investment would do, only that he “knew it was cheap.”

Alaska is a new venture–Barros co-founded the firm in July of 2015—so he’s new at managing other people’s money. The firm oversees about 1.6 billion reais (approximately $490 million), three-quarters of which is Barros’ own cash. But his investing method hasn’t changed: “He only holds a handful of stocks, favors companies with bottom-of-the-barrel valuations and usually jumps in as everyone else is bailing.” The Black Master fund returned 143 percent in 2016, versus a 33 percent gain for Brazil’s benchmark Ibovespa stock index.

“Perfecting patience is all I’ve done over the past 50 years,” Barros says. “I love when things get bad. When it’s bad, I buy.” 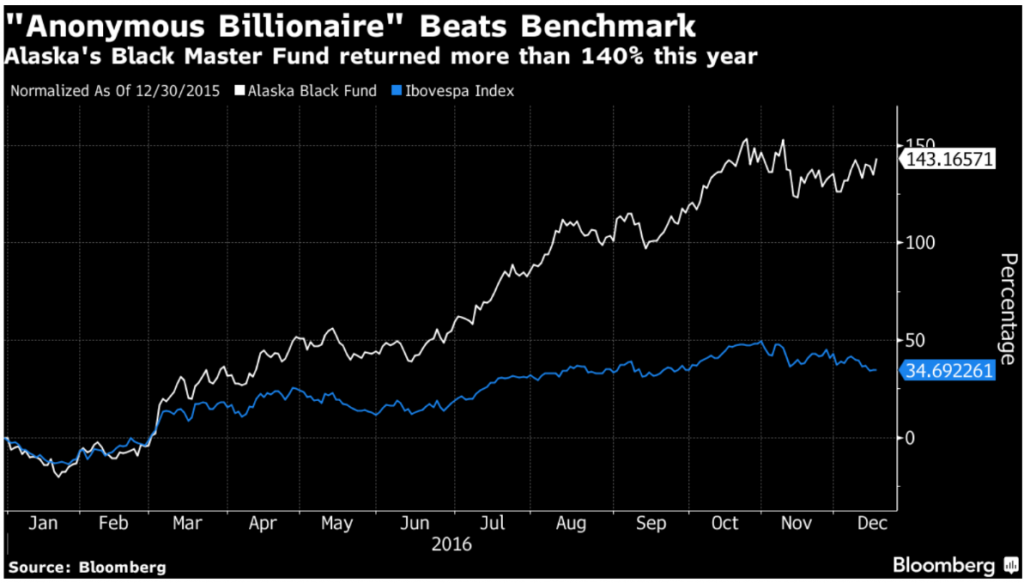 US Will Avoid A Recession, Says Ariel’s John...