A brief piece in the Wall Street Journal by reporter Steven Russolillo comments on the American Association of Individual Investors’ weekly survey of sentiment, which is often regarded as a contrarian indicator. As the graph below illustrates, “stocks often have a tendency to do the opposite of how investors say they have felt about the market.” For example, the AAII registered its lowest bullish reading in 17 years on March 5, 2009 – precisely the beginning of the current bull market. However, a similarly low bullish reading in January 2008 was followed by a 34% tumble in the S&P 500 over the next year. Given such non-contrarian occurrences, “the survey may be regarded as “an interesting metric that tends to glean more insight at extreme levels” while recognizing it is “far from a perfect market-timing mechanism.” Russolillo also points out that the survey covers “a tiny sliver of the investing public” (AAII’s roughly 175,000 members) and also questions whether “the social media age [in which] investor mood swings tend to be sharper and more hyperbolic than usual” may undermine the value of even “extreme levels of sentiment.” Nonetheless, he suggests “the AAII survey is often best used in the context of other market sentiment indicators, including mutual-fund flows or the CBOE’s Volatility Index.” 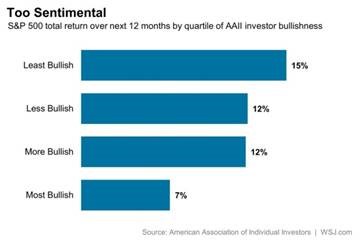 Below is a snapshot of the current AAII Sentiment Survey readings along with the historical averages for comparison purposes.